What is a consistency level?

The definition of consistency is fundamentally dependent on context. In general, consistency refers to the ability of a system to ensure that it complies (without fail) to a predefined set of rules. However, this set of rules changes based on context. For example, the C of ACID and the C of CAP both refer to consistency. However, the set of rules implied by these two contexts are totally different. In ACID, the rules refer to application-defined semantics. A system that guarantees the C of ACID ensures that processing a transaction does not violate referential integrity constraints, foreign-key constraints, and any other application-specific constraints (such as: “every user must have a name”). In contrast, the consistency C of CAP refers to the rules related to making a concurrent, distributed system appear like a single-threaded, centralized system. Reads at a particular point in time have only one possible result: they must reflect the most recent completed write (in real time) of that data item, no matter which server processed that write.

One point of confusion that we can eliminate at this point is that the phrase “consistency level” is not typically used in the context of ACID consistency. This is because the C of ACID is almost entirely the responsibility of the application developer --- only the developer can ensure that the code they place inside a transaction does not violate application semantics when it is run in isolation. ACID is really a misnomer --- really it should be AID, since only those three (atomicity, isolation, and durability) are in the realm of system guarantees. [Joe Hellerstein claims that he was taught that the C in ACID was only included to make an LSD pun, but acknowledges that this may be apocryphal.]

Depending on how a particular system is architected, perfect consistency becomes easier or harder to achieve. In poorly designed systems, achieving perfection comes with a prohibitive performance and availability cost, and users of such systems are pushed to accept guarantees significantly short of perfection. However, even in well designed systems, there is often a non-trivial performance benefit achieved by accepting guarantees short of perfection.

An overview of well-known consistency levels

The notion of a consistency level originated by researchers of shared-memory multi-processor systems. The goal of the early work was to reason about how and when different threads of execution, which may be running concurrently and accessing overlapping sets of data in shared memory, should see the writes performed by each other. As such, most of the initial work focused on reads and writes of individual data items, rather than at the level of groups of reads and writes within a transaction. We will begin our discussion using the same terminology as the original research and models, and then proceed to discuss how to apply these ideas to transactions. 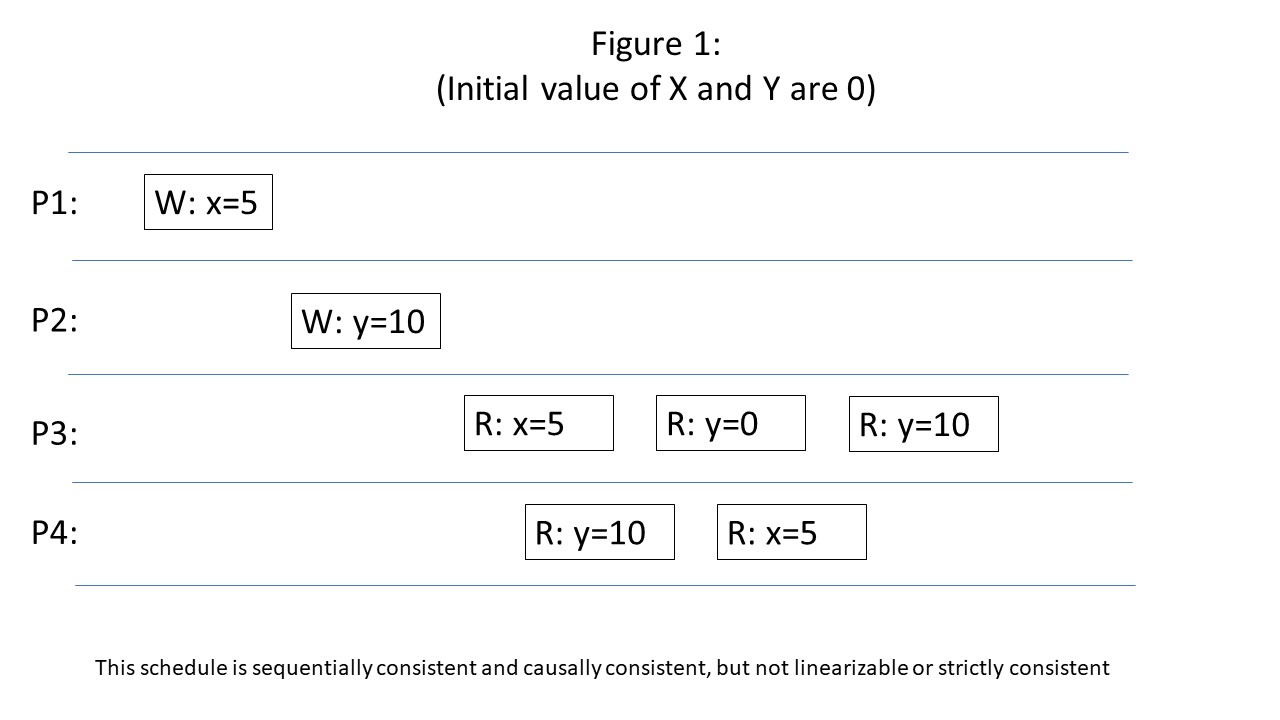 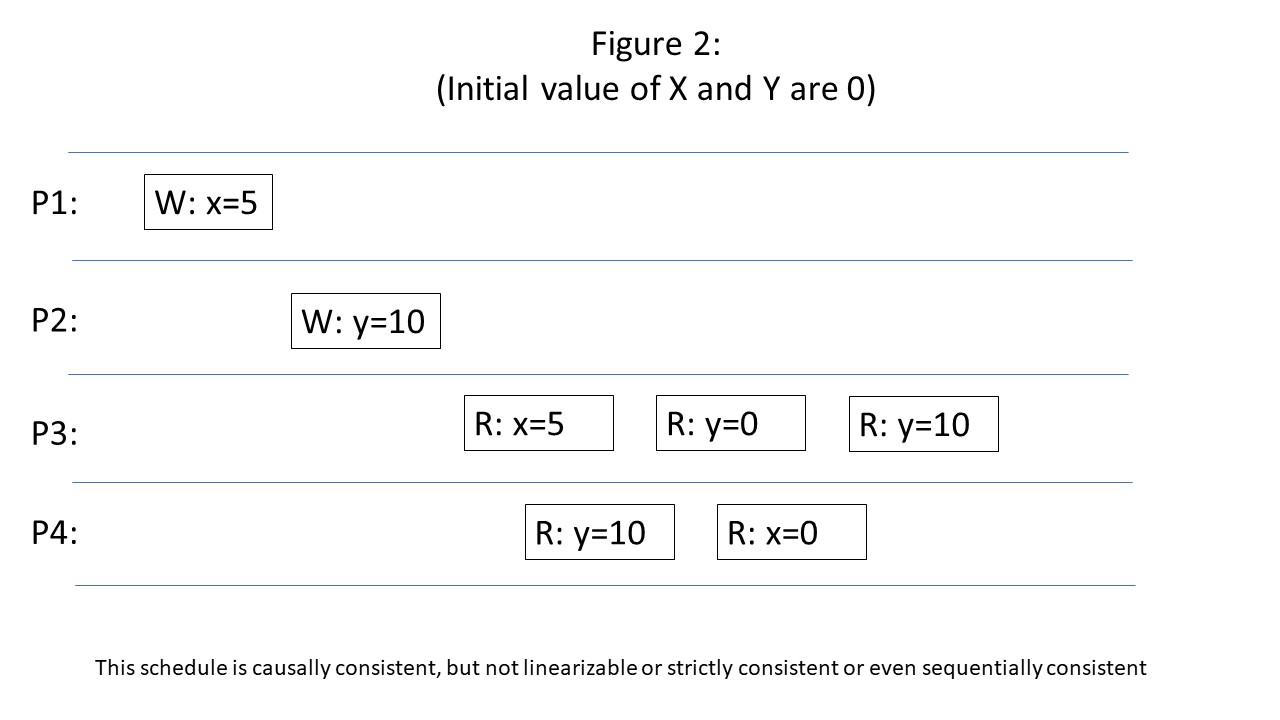 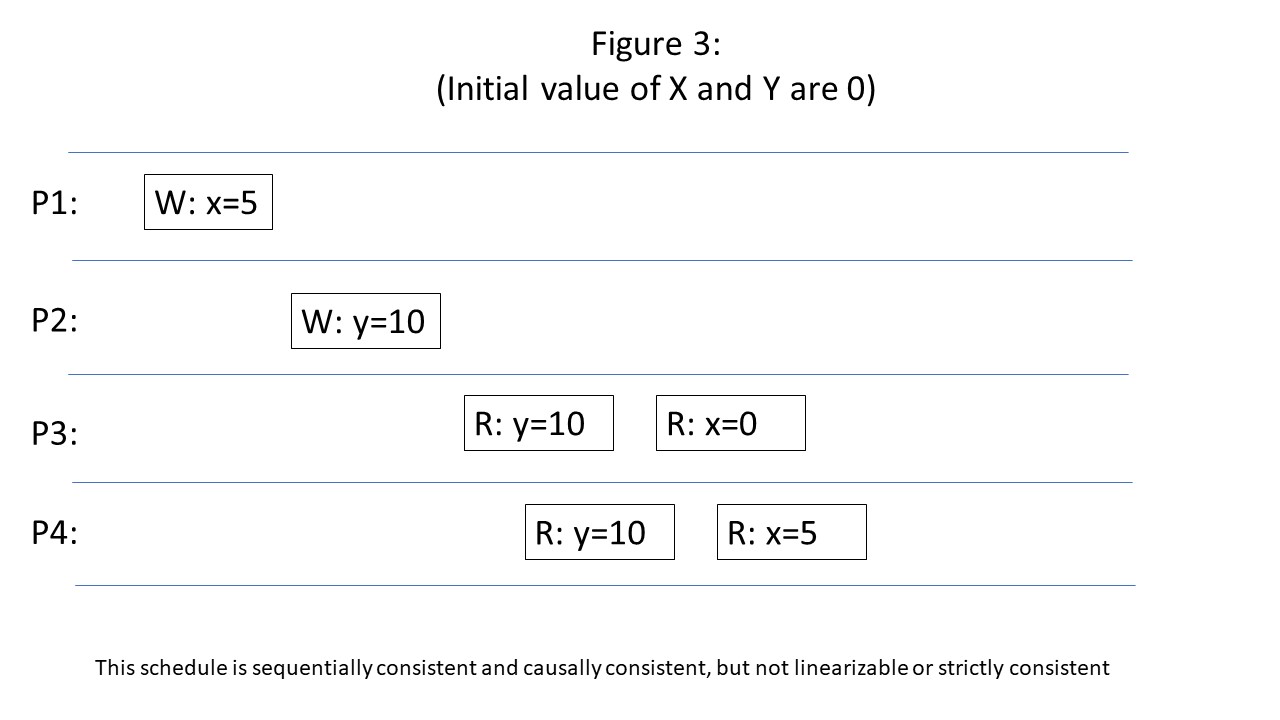 In contrast to sequential consistency, strict consistency does place real time requirements on how to order the writes. It assumes that it is always possible to know what time it currently is with zero error --- i.e. that every thread of execution agree on the precise current time. The order of the writes in the sequential order must be equal to the real time that these writes were issued. Furthermore, every read operation must read the value of the most recent write in real time --- no matter which thread of execution initiated that write. In a distributed system (and even multi-processor single-server systems), it is impossible in practice to have global agreement on precise current time, which renders strict consistency to be mostly of theoretical interest.

None of Figures 1, 2, or 3 above satisfy strict consistency because they all contain either a read of x=0 or a read of y=0 after the value of x or y has been written to a new value. However, Figure 4 below satisfies strict consistency since all reads reflect the most recent write in real time: 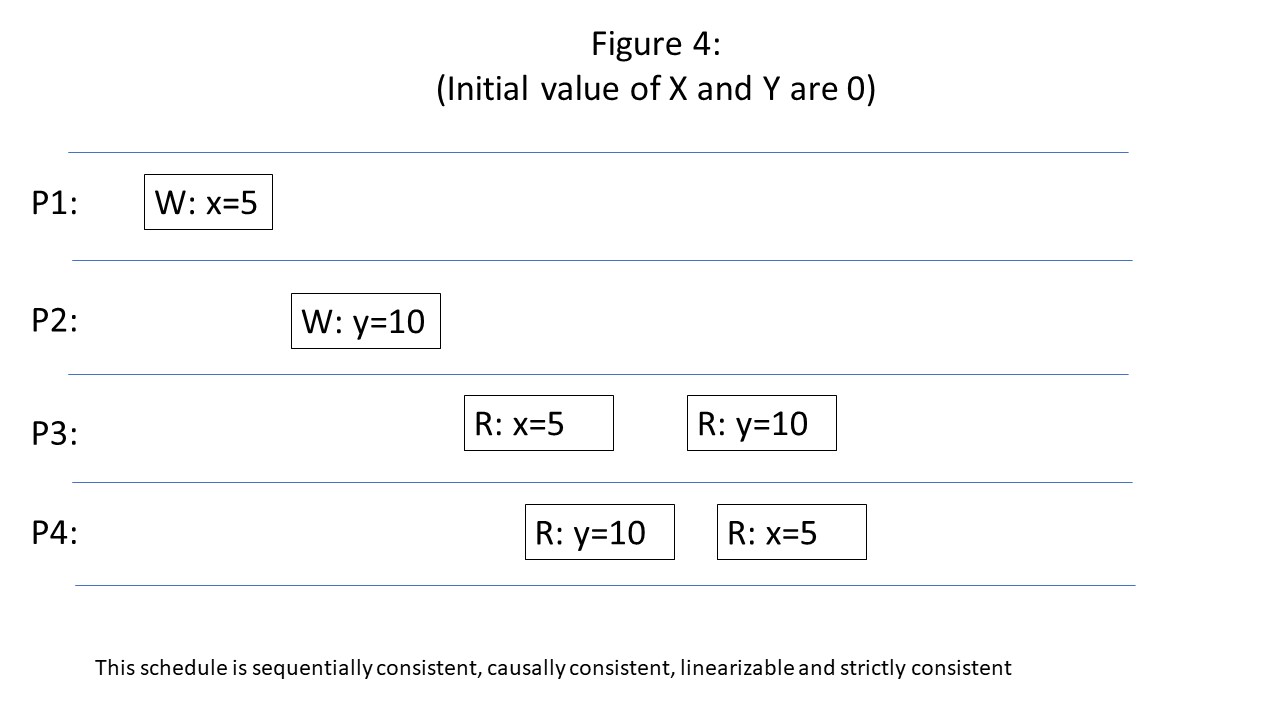 In a distributed/replicated system, where writes and reads can originate anywhere, the highest level of consistency obtained in practice is linearizability (also known as “atomic consistency” which is what it is called in the CAP theorem). Linearizability is very similar to strict consistency: both are extensions of sequential consistency that impose real time constraints on writes. The difference is that the linearizability model acknowledges that there is a period of time that occurs between when an operation is submitted to the system, and when the system responds with an acknowledgement that it was completed. In a distributed system, the sending of the write request to the correct location(s) --- which may include replication --- can occur during this time period. A linearizability guarantee does not place any ordering constraints on operations that occur with overlapping start and end times. The only ordering constraint is for operations that do not overlap in time --- only in those cases does the earlier write have to be seen before the later write. 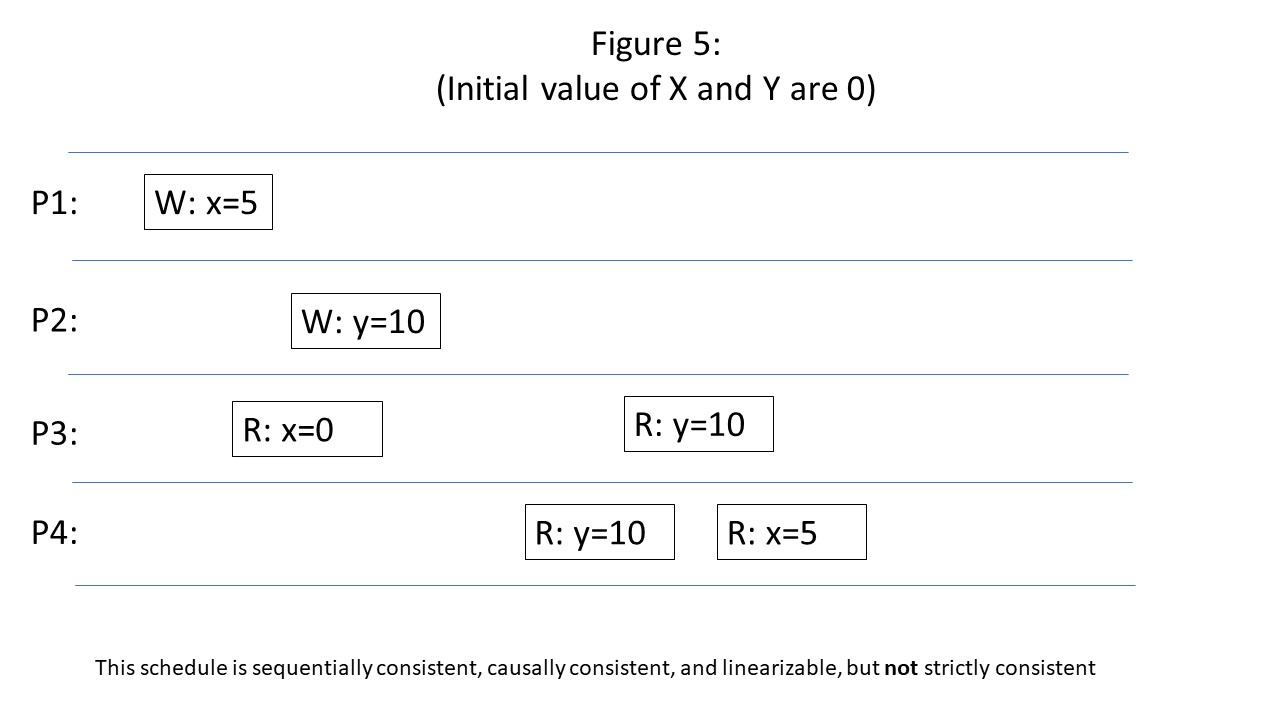 Causal consistency is a popular and useful consistency level that is slightly below sequential consistency. In sequential consistency, all writes must be globally ordered --- even if they are totally unrelated to each other. Causal consistency does not enforce orderings of unrelated writes. However, if a thread of execution performs a read of some data item (call it X) and then writes that data item or a different one (call it Y), it assumes that the subsequent write may have been caused by the read. Therefore, it enforces the order of X and Y --- specifically all threads of execution must observe the write of Y after the write of X. 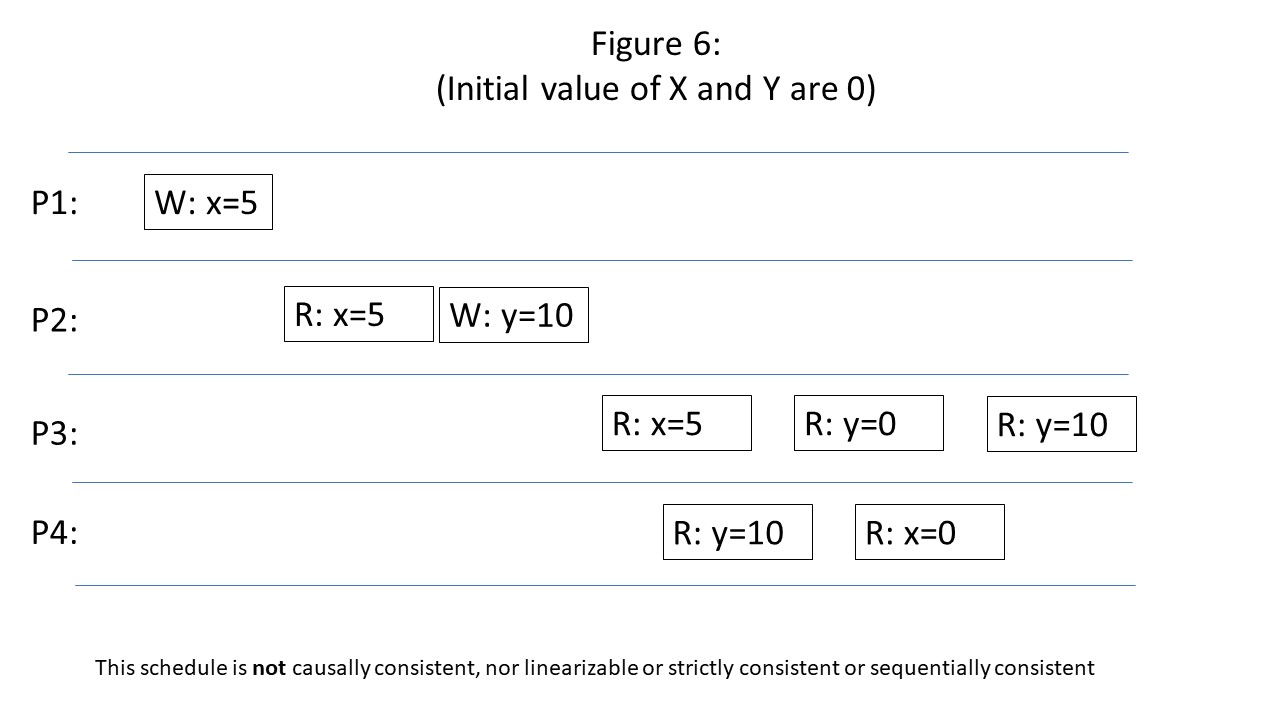 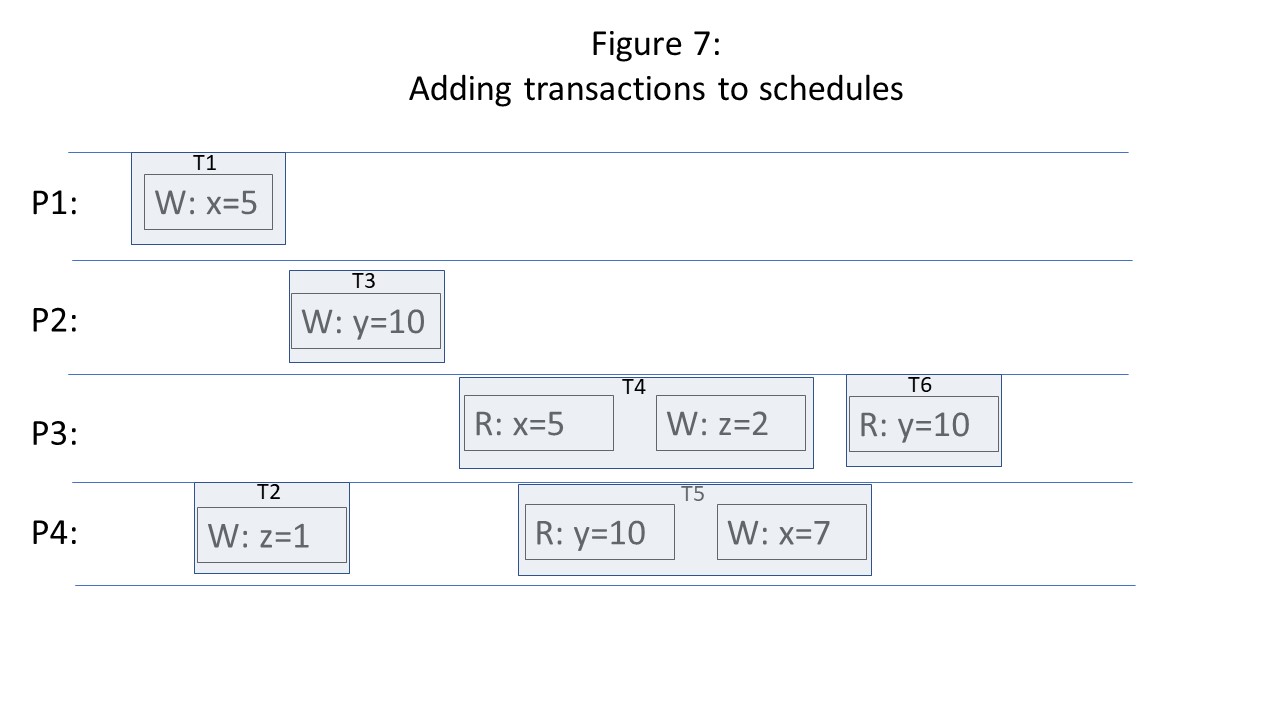 The presence of a transaction in a consistency diagram adds additional constraints corresponding to AID of ACID: all of the reads and writes within the transaction succeed or fail together (atomicity), they are isolated from other concurrently running transactions (the degree of isolation will depend on the isolation level), and writes of committed transactions will outlive all kinds of system failure (durability).