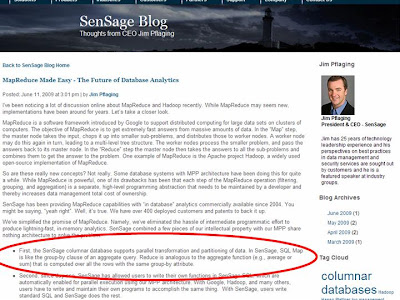 Sensage is another column-store product that I've known about for a long time. Mike Stonebraker even cited them in the original C-Store paper. But their marketing department really crossed a line in my opinion. Yesterday, a blog post under the CEO's name (I doubt the CEO actually wrote this post for reasons that will be obvious in a second) appeared that attacked MapReduce in a similar, but less inflammatory way than DeWitt and Stonebraker's famous blog post written a year and a half ago in January 2008. The basic premise of both posts:
The overlap of the argument already bothered me a little. But then I saw the text circled above:

"[...] map is like the group-by clause of an aggregate query. Reduce is analogous to the aggregate function (e.g., average or sum) that is computed over all the rows with the same group-by attribute. "

It seems like an unusual writing style to say that Map is "like" group-by and Reduce is "analogous" to aggregate. Either they're both "like" or both "analogous". But then, here's a sentence in the original blog post by DeWitt and Stonebraker:

"[...] map is like the group-by clause of an aggregate query. Reduce is analogous to the aggregate function (e.g., average) that is computed over all the rows with the same group-by attribute."

This is WAY too similar in my opinion.

Come on SenSage. Have an original opinion. And don't copy year-and-a-half old text that most of us have already read.

Stonebraker cited you in the C-Store paper. You could at least cite him and DeWitt in return when you are basically rehashing their ideas.
Posted by Daniel Abadi at 2:47 PM