I was chatting with Raj Cherabuddi, founder of Kickfire recently about Kickfire’s approach to parallelism, and I think that some of the problems they have to deal with regard to parallelizing queries are quite different from standard parallel database systems, and warrant talking about in a blog post.

Parallel databases typically achieve parallelism via “data-partitioned parallelism”. The basic idea is that data is horizontally partitioned across processors, and each processor executes a query on its own local partition of the data. For example, let’s say a user wants to find out how many items were sold over $50 on August 8th 2009:

If elements of the line item table are partitioned across different processors, then each processor will execute the complete query locally, computing a count of all tuples that pass the predicates on its partition of the data. These counts can then be combined in a “merge” final step into a global count. The vast majority of the query (everything except the very short final merge step) can be processed completely in parallel across processors.

It turns out that the iterator model is quite inefficient from an instruction cache and data cache perspective, since each operator runs for a very short time before yielding control to a parent or child operator (it just processes one tuple). Furthermore, there is significant function call overhead, as “getNext” is often called multiple times per tuple. Consequently modern systems will run each operator over batches of tuples (instead of on single tuples) to amortize initial cache miss and function call overheads over multiple tuples. Operator output is buffered, and a pointer to this buffer is sent to the parent operator when it is the parent operator’s turn to run.

Whether the iterator model is used or the batched/staged model is used, there is only one operator running at once (per processor). Thus, the only form of parallelism is the aforementioned data-partitioned parallelism across processors. Even if a processor has multiple hardware contexts/cores, each processing resource will be devoted to processing the same one operator at a time (for cache performance reasons --- see e.g. this paper).

Kickfire, along with other companies that perform database operations directly in the hardware using FPGA technology, like Netezza and XtremeData, need to take a different approach to parallelism.

Before discussing the effect on parallelism, let’s begin with a quick overview of FPGA (field programmable gate array) technology, At the lowest level, a FPGA contains a array of combinational logic, state registers, and memory, that can be configured via a mesh of wires to implement desired logical functions. Nearly any complex algorithm, including database operations such as selection, projection, and join, can be implemented in a FPGA and in doing so, can be run at the speed of the hardware. Not only is performance improved by running these algorithms in the hardware, but the chip can also be run at orders of magnitude lower clock frequencies, which result in commensurate gains in power efficiency. In many cases, operations that take hundreds to thousands of CPU instructions can be performed in a single clock cycle in FPGA logic.

Kickfire therefore employs direct transistor-based processing engines in the FPGA to natively execute complete pipelines of relational database operations. The scale and density of the VLSI processes used in today FPGA’s enable a large number (order of hundreds) of these custom operations to occur in parallel, enabling the use of parallel processing algorithms that can improve performance even further.

The ability to have a large number of operations occurring in parallel means that the query processing engines do not need to switch back and forth between different operators (as described in the iterator and blocked/staged schemes above). However, if you want to get the most out of the parallelism, data partitioned parallelism can only get you so far.

For example, if every processing unit is devoted to performing a selection operation on a different partition of the data, then the result of the selection operator will build up, eventually exceeding the size of on-chip and off-chip buffers, thereby starving the execution engines. Consequently, Kickfire implemented efficient pipelined parallelism in addition to data partitioned parallelism, so that all operators in a query plan are running in the hardware at the same time, and data is being consumed at the approximate rate that it is being produced. Kickfire implemented advanced networking techniques in the areas of queuing and flow control to manage the data flow between the multiple producers and consumers, ensuring that the data, in most cases, stays on the chip, and only occasionally spills to the memory (off-chip buffers). Keeping the intermediate datasets live on the chip prevents memory latency and bandwidth from becoming a bottleneck.

For example, a hardcoded Kickfire query might look like the figure below (ignoring the column-store specific operators which is a story for another day): 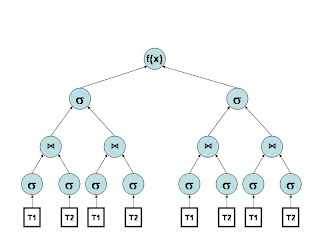 Kickfire also claims to be able to devote hardware to running multiple queries at the same time (inter-query parallelism). Getting the right mix of data-partitioned parallelism, pipelined parallelism, and inter-query parallelism is a tricky endeavor, and is part of Kickfire’s “secret sauce”. Clearly, this requires some amount of knowledge about the expected cardinality of each operator, and the Kickfire software uses information from the catalog to help figure all of this out. One would expect this process to get more difficult for complex queries --- it will be interesting to see how Kickfire performs on complex workloads as they continue to gain customer traction (Raj makes a compelling case that, in fact, it is the most complex queries where FPGA technology can shine the brightest).

In a nutshell, Kickfire uses column-oriented storage and execution to address I/O bottlenecks (column-oriented storage has been covered extensively elsewhere in my blog, but you can read about the specifics of Kickfire’s column-store on their blog), and FPGA-based data-flow architecture to address processing and memory bottlenecks. Their “SQL chip” acts as a coprocessor and works in conjunction with the x86 processors (which runs a SQL execution engine in the software when needed, though this is usually the exception path) in their base server. By alleviating these three important bottlenecks, Kickfire is able to deliver high performance; yet still achieves tremendous power efficiency thanks to the low clock frequencies.

Overall, although I have openly questioned Kickfire’s go-to-market strategy in past posts (see here and here), their non-technical departments seem a little disorganized at times (see Jerome Pineau’s experience), and some highly visible employees are no longer with the company (notably Ravi Krishnamurthy who presented their SIGMOD paper and Justin Swanhart who did a nice job explaining the Kickfire column-store features in the aforementioned write-up), I remain a fan of their technology. If they make it through the current difficult economic climate, it will be at the virtue of their technology and the tireless work of people like Raj. As the rate of clock speed increases of commodity processors continues to slow down, being able to perform database operations in the hardware becomes an increasingly attractive proposition.
Posted by Daniel Abadi at 8:36 PM