An explanation of the difference between Isolation levels vs. Consistency levels

(Editor's note: This post is cross-posted on Fauna's blog, where Daniel Abadi serves as an adviser. Fauna is is a serverless, cloud database system that is built using the Calvin scalable distributed data store technology from Daniel Abadi's research lab.)

In several recent posts, we discussed two ways to trade off correctness for performance in database systems. In particular, I wrote two posts (first one and second one) on the subject of isolation levels, and one post on the subject of consistency levels.

This post is designed to be a self-contained overview of the difference between isolation levels and consistency levels and how they interact with each other. You do not need to read my previous posts that I linked to above in order to read this post. Nonetheless, some of the definitions and fundamental concepts from those posts are important background material for understanding this post. To avoid making you read those previous posts, in this section, I will summarize the pertinent background material (but for more detail and elaboration, please see the previous posts).

We explained in our previous post that the notion of a consistency level originated by researchers of shared-memory multi-processor systems. The goal of the early work was to reason about how and when different threads of execution, which may be running concurrently and accessing overlapping sets of data in shared memory, should see the writes performed by each other. We gave a bunch of examples of consistency levels with examples using schedule figures similar to the one below, in which different threads of execution write and read data as time moves forward from left to right. In the figure below, we have four threads of execution: P1, P2, P3, and P4. P1 writes the value 5 to x, and thread P2 writes the value 10 to y after P1’s write to x completes. P3 and P4 read the new value (10) for y during overlapping periods of time. P3 and P4 then read x during overlapping periods of time. P3 starts slightly earlier and sees the old value, while P4 starts (and completes) later sees the new value. 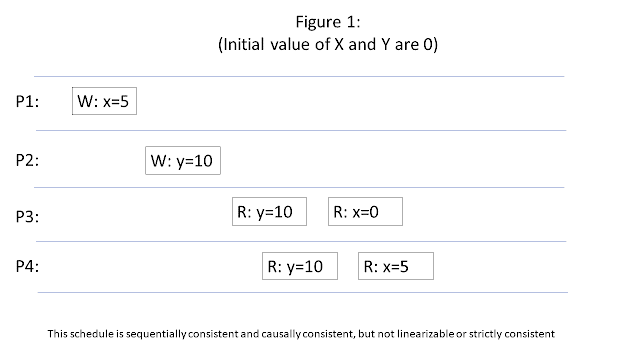 Sequential consistency is a very high level of consistency, but it is not perfect. The reason why it is not perfect is that the globally observed write order contradicts reality. In reality, the write to x happens before the write to y. Furthermore, P3 sees a stale value for x: it reads the old value of x (0) long after the write of 5 to x has completed. This return of the non-current version of x is another example of contradicting reality. Perfect consistency (in this post, we are going to call linearizability “perfect” even though strict consistency has slightly stronger guarantees) ensures both: that every thread of execution observes the same write ordering AND that write ordering matches reality (if write A completes before write B starts, no thread will see the write to B happening before the write to A). This guarantee is also true for reads: if a write to A completes before a read of A begins, then the write of A will be visible to the subsequent read of A (assuming A was not overwritten by a different write request in the interim). 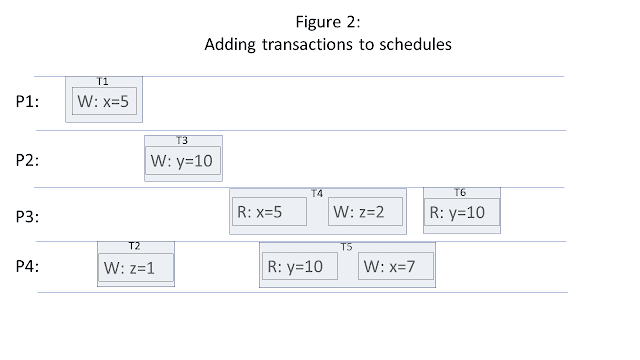 Ignorance is dangerous! You need to understand the difference between isolation guarantees and consistency guarantees. And you need to know what you are getting for both types of guarantees.

Let’s look at an example. The diagram below shows a system running two transactions in different threads of execution. Each transaction reads the current value of X, adds one to it, and writes it back out. In any serializable execution, the final value of X after running both transactions should be two higher than the initial value. But in this example, we have a system running at perfect, linearizable consistency, but the final value of X is only one higher than the initial value. Clearly, this is a correctness bug.

The basic problem is that historically, as we described above, consistency levels are only designed for single-operation actions. They generally do not model the possibility of a group of actions that commit or abort atomically. Therefore, they do not protect against the case where writes are performed only temporarily, but ultimately get rolled back if a transaction aborts. Furthermore, without explicit synchronization constructs, consistency levels do not protect against reads (on which subsequent writes in that same transaction depend) becoming immediately stale as a result of a concurrent write by a different process. (This latter problem is the problem that was shown in Figure 3).

The bottom line is that as soon as you have the concept of a transaction --- a group of read and write operations --- you need to have rules for what happens during the timeline between the first of the operations of the group and the last of the operations of the group. What operations by other threads of execution are allowed to occur during this time period between the first and last operation and which operations are not allowed? These set of rules are defined by isolation levels that I discussed previously. For example, serializable isolation states that the only concurrent operations that are allowed to occur are those which will not cause a visible change in database state relative to what the state would have been if there were no concurrent operations.

The bottom line: as soon as you allow transactions, you need isolation guarantees.

What about vice versa? Once you have isolation guarantees, do you need consistency guarantees?

Let’s look at another example. The diagram below shows a system running three transactions. In one thread of execution, a transaction runs (call it T1) that adds one to X (it was originally 4 and now it is 5). In the other thread of execution, a transaction runs (call it T2) that writes the current value of X to Y (5). After the transaction returns, a new transaction runs (call it T3) that reads the value of X and sees the old value (4). The result is entirely serializable (the equivalent serial order is T3 then T1 then T2). But it violates strict serializability and linearizability because it reorders T3 before T2 even though T3 started in real time after T2 completed. Furthermore, it violates sequential consistency because T2 and T3 are run in the same thread of execution, and under sequential consistency, the later transaction, T3, is not allowed to see an earlier value of X than the earlier transaction, T2. This could result in a bug in the application: many applications are unable to handle the phenomenon of database state going backwards in time across transactions --- and especially not within the same session.

In general, all of the time travel bugs that I discussed in a previous post in the context of serializability are possible at any isolation level. Isolation levels only specify what happens for concurrent transactions. If two transactions are not running at the same time, no isolation guarantee in the world will specify how they should be processed. They are already perfectly isolated from each other by virtue of not running concurrently with each other! This is what makes time travel correctness bugs possible at even the highest levels of isolation. If you want guarantees for nonconcurrent transactions: for example, you want to be sure that a later transaction reads the writes of an earlier transaction, you need consistency guarantees.

So the bottom line is the following: once you have transactions with more than one operation, you need isolation guarantees. And if you need any kind of guarantee for non-concurrent transactions, you need consistency guarantees. Most of the time, if you are using a database system, you need both.

Database system vendors will continue to use single terms to describe a particular mixture of isolation levels and consistency levels. My recommendation is to avoid getting confused by these loaded definitions and break them apart before starting to reason about them. If you see an “isolation level” with three or more words, chances are, it is really an isolation level combined with a consistency level. Break apart the term into the component isolation and consistency guarantees, and then carefully consider each guarantee separately. What does your application require as far as isolation of concurrently running transactions? Does the isolation guarantee that the isolation level is giving you match your requirements? Furthermore, what does your application require as far as ordering of non-concurrent transactions? Does the consistency guarantee that you extracted from the complex term match your requirements?